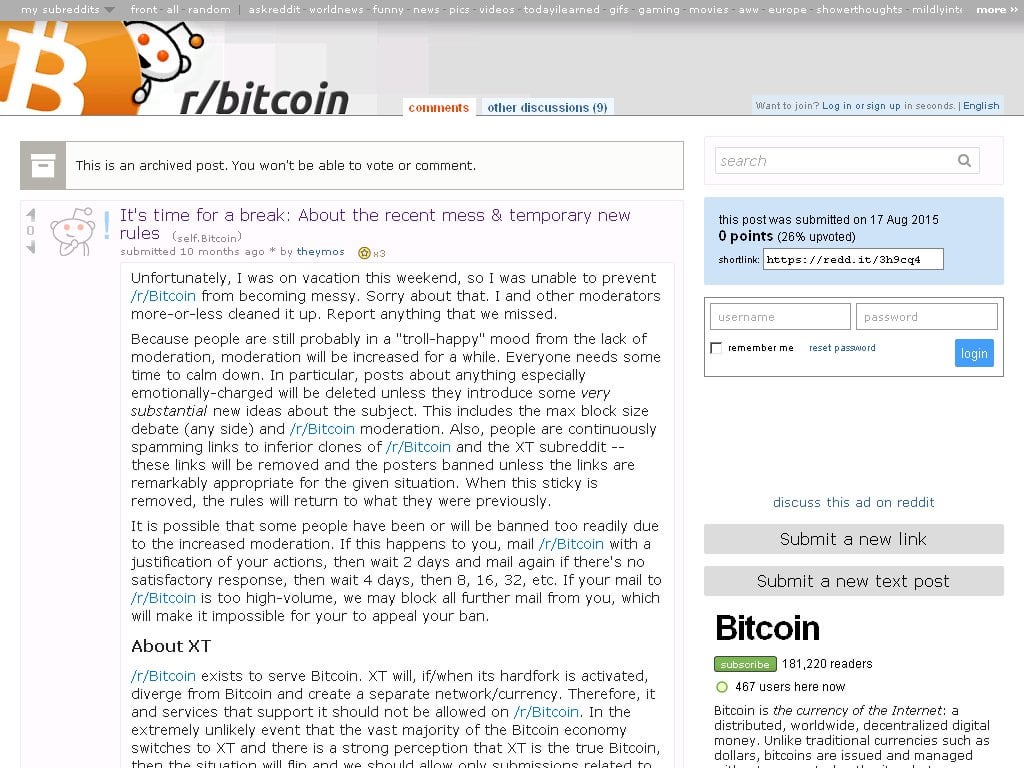 This FAQ and information thread serves to inform both new and existing users about common Bitcoin topics that readers coming to this Bitcoin subreddit may have. This is a living and breathing document, which will change over time. If you have suggestions on how to change it, please comment below or message the mods.

The r/btc reddit community was originally created as a community to discuss bitcoin. It quickly gained momentum in August 2015 when the bitcoin block size debate heightened. On the legacy r/bitcoin subreddit it was discovered that moderators were heavily censoring discussions that were not inline with their own opinions.

Once realized, the subreddit subscribers began to openly question the censorship which led to thousands of redditors being banned from the r/bitcoin subreddit. A large number of redditors switched to other subreddits such as r/bitcoin_uncensored and r/btc. For a run-down on the history of censorship, please read A (brief and incomplete) history of censorship in /r/bitcoin by John Blocke and /r/Bitcoin Censorship, Revisted by John Blocke. As yet another example, r/bitcoin censored 5,683 posts and comments just in the month of September 2017 alone. This shows the sheer magnitude of censorship that is happening, which continues to this day. Read a synopsis of /r/bitcoin to get the full story and a complete understanding of why people are so upset with r/bitcoin‘s censorship. Further reading can be found here and here with a giant collection of information regarding these topics.

Why is censorship bad for Bitcoin?

As demonstrated above, censorship has become prevalent in almost all of the major Bitcoin communication channels. The impacts of censorship in Bitcoin are very real. “Censorship can really hinder a society if it is bad enough. Because media is such a large part of people’s lives today and it is the source of basically all information, if the information is not being given in full or truthfully then the society is left uneducated […] Censorship is probably the number one way to lower people’s right to freedom of speech.” By censoring certain topics and specific words, people in these Bitcoin communication channels are literally being brain washed into thinking a certain way, molding the reader in a way that they desire; this has a lasting impact especially on users who are new to Bitcoin. Censoring in Bitcoin is the direct opposite of what the spirit of Bitcoin is, and should be condemned anytime it occurs. Also, it’s important to think critically and independently, and have an open mind.

Why do some groups attempt to discredit r/btc?

This subreddit has become a place to discuss everything Bitcoin-related and even other cryptocurrencies at times when the topics are relevant to the overall ecosystem. Since this subreddit is one of the few places on Reddit where users will not be censored for their opinions and people are allowed to speak freely, truth is often said here without the fear of reprisal from moderators in the form of bans and censorship. Because of this freedom, people and groups who don’t want you to hear the truth with do almost anything they can to try to stop you from speaking the truth and try to manipulate readers here. You can see many cited examples of cases where special interest groups have gone out of their way to attack this subreddit and attempt to disrupt and discredit it. See the examples here.

What is the goal of r/btc?

This subreddit is a diverse community dedicated to the success of bitcoin. r/btc honors the spirit and nature of Bitcoin being a place for open and free discussion about Bitcoin without the interference of moderators. Subscribers at anytime can look at and review the public moderator logs. This subreddit does have rules as mandated by reddit that we must follow plus a couple of rules of our own. Make sure to read the /r/btc wiki for more information and resources about this subreddit which includes information such as the benefits of Bitcoin, how to get started with Bitcoin, and more.

Bitcoin is a digital currency, also called a virtual currency, which can be transacted for a low-cost nearly instantly from anywhere in the world. Bitcoin also powers the blockchain, which is a public immutable and decentralized global ledger. Unlike traditional currencies such as dollars, bitcoins are issued and managed without the need for any central authority whatsoever. There is no government, company, or bank in charge of Bitcoin. As such, it is more resistant to wild inflation and corrupt banks. With Bitcoin, you can be your own bank. Read the Bitcoin whitepaper to further understand the schematics of how Bitcoin works.

What is Bitcoin Cash?

Bitcoin Cash (ticker symbol: BCH) is an updated version of Bitcoin which solves the scaling problems that have been plaguing Bitcoin Core (ticker symbol: BTC) for years. Bitcoin (BCH) is just a continuation of the Bitcoin project that allows for bigger blocks which will give way to more growth and adoption. You can read more about Bitcoin on BitcoinCash.org or read What is Bitcoin Cash for additional details.

How do I buy Bitcoin?

You can buy Bitcoin on an exchange or with a brokerage. If you’re looking to buy, you can buy Bitcoin with your credit card to get started quickly and safely. There are several others places to buy Bitcoin too; please check the sidebar under brokers, exchanges, and trading for other go-to service providers to begin buying and trading Bitcoin. Make sure to do your homework first before choosing an exchange to ensure you are choosing the right one for you.

How do I store my Bitcoin securely?

Why is my transaction taking so long to process?

If you have sent out a Bitcoin transaction and it’s delayed, chances are the transaction fee you used wasn’t enough to out-compete others causing it to be backlogged. The transaction won’t confirm until it clears the backlog. This typically occurs when using the Bitcoin Core (BTC) blockchain due to poor central planning.

If you are using Bitcoin (BCH), you shouldn’t encounter these problems as the block limits have been raised to accommodate a massive amount of volume freeing up space and lowering transaction costs.

Why does my transaction cost so much, I thought Bitcoin was supposed to be cheap?

As described above, transaction fees have spiked on the Bitcoin Core (BTC) blockchain mainly due to a limit on transaction space. This has created what is called a fee market, which has primarily been a premature artificially induced price increase on transaction fees due to the limited amount of block space available (supply vs. demand). The original plan was for fees to help secure the network when the block reward decreased and eventually stopped, but the plan was not to reach that point until some time in the future, around the year 2140. This original plan was restored with Bitcoin (BCH) where fees are typically less than a single penny per transaction.

What is the block size limit?

The original Bitcoin client didn’t have a block size cap, however was limited to 32MB due to the Bitcoin protocol message size constraint. However, in July 2010 Bitcoin’s creator Satoshi Nakamoto introduced a temporary 1MB limit as an anti-DDoS measure. The temporary measure from Satoshi Nakamoto was made clear three months later when Satoshi said the block size limit can be increased again by phasing it in when it’s needed (when the demand arises). When introducing Bitcoin on the cryptography mailing list in 2008, Satoshi said that scaling to Visa levels “would probably not seem like a big deal.”

What is the block size debate all about anyways?

The block size debate boils down to different sets of users who are trying to come to consensus on the best way to scale Bitcoin for growth and success. Scaling Bitcoin has actually been a topic of discussion since Bitcoin was first released in 2008; for example you can read how Satoshi Nakamoto was asked about scaling here and how he thought at the time it would be addressed. Fortunately Bitcoin has seen tremendous growth and by the year 2013, scaling Bitcoin had became a hot topic. For a run down on the history of scaling and how we got to where we are today, see the Block size limit debate history lesson post.

What is a hard fork?

A hard fork is when a block is broadcast under a new and different set of protocol rules which is accepted by nodes that have upgraded to support the new protocol. In this case, Bitcoin diverges from a single blockchain to two separate blockchains (a majority chain and a minority chain).

What is a soft fork?

A soft fork is when a block is broadcast under a new and different set of protocol rules, but the difference is that nodes don’t realize the rules have changed, and continue to accept blocks created by the newer nodes. Some argue that soft forks are bad because they trick old-unupdated nodes into believing transactions are valid, when they may not actually be valid. This can also be defined as coercion, as explained by Vitalik Buterin.

Doesn’t it hurt decentralization if we increase the block size?

Some argue that by lifting the limit on transaction space, that the cost of validating transactions on individual nodes will increase to the point where people will not be able to run nodes individually, giving way to centralization. This is a false dilemma because at this time there is no proven metric to quantify decentralization; although it has been shown that the current level of decentralization will remain with or without a block size increase. It’s a logical fallacy to believe that decentralization only exists when you have people all over the world running full nodes. The reality is that only people with the income to sustain running a full node (even at 1MB) will be doing it. So whether it’s 1MB, 2MB, or 32MB, the costs of doing business is negligible for the people who can already do it. If the block size limit is removed, this will also allow for more users worldwide to use and transact introducing the likelihood of having more individual node operators. Decentralization is not a metric, it’s a tool or direction. This is a good video describing the direction of how decentralization should look.

Additionally, the effects of increasing the block capacity beyond 1MB has been studied with results showing that up to 4MB is safe and will not hurt decentralization (Cornell paper, PDF). Other papers also show that no block size limit is safe (Peter Rizun, PDF). Lastly, through an informal survey among all top Bitcoin miners, many agreed that a block size increase between 2-4MB is acceptable.

Bitcoin is a fluid ever changing system. If you want to keep up with Bitcoin, we suggest that you subscribe to r/btc and stay in the loop here, as well as other places to get a healthy dose of perspective from different sources. Also, check the sidebar for additional resources. Have more questions? Submit a post and ask your peers for help!